Warning: Do Not Use THIS Popular Sugar Substitute (Linked to Cancer, Seizures & More…) 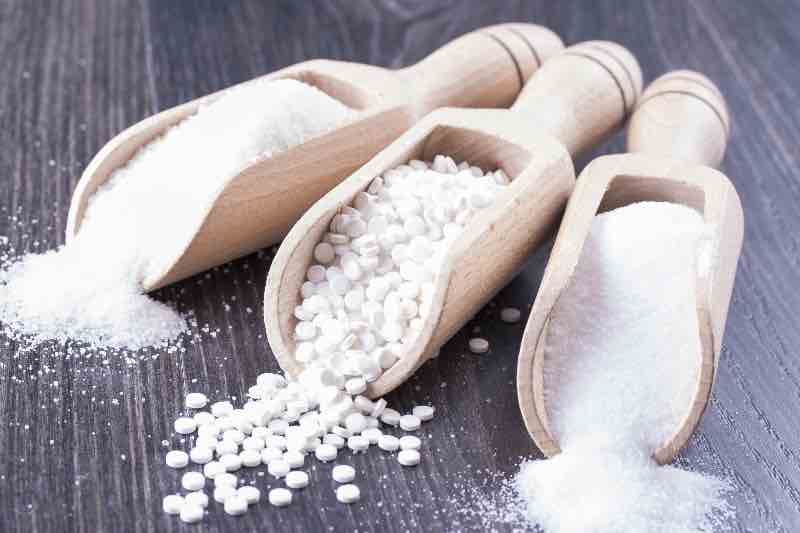 The Hidden Health Dangers Of Aspartame

First question: What is it?!

It sounds sort of like a weird thing that none of us would ever eat. But… wrong!

Aspartame is really common… and it is very likely that you and I are both eating it pretty much every day. (That is, unless you know what to look for so you can avoid it.)

Here are the details:

First, let’s discuss what it is. This is an easy answer, once you do a little research!

Aspartame (sold under the brand names of Equal and Nutrasweet), to put it super simply… is an artificial sweetener. It’s 200 times sweeter than sucrose!!

And, it’s low calorie (which sounds great, but just wait…)

It’s used in A LOT of food and drinks. I know, I’m thinking of artificial sweeteners and it kind of sounds great, right?!

But let’s wait until you hear the kinds of foods and drinks commonly associated with it. (They aren’t all great for you!)

Want some examples? No problem.

I know… these might be foods and drinks that you consume fairly often. They are for me!

How does it work? Aspartame is made up of two naturally occurring amino acids—aspartic acid and phenylalanine. Part of this sweetener gets broken down into methanol when your body starts to process it.

In small quantities, it’s okay. But methanol (which is what it becomes in your body) is toxic in large quantities.

This is part of why some people think aspartame is dangerous… since too much absorption of small amounts still might cause issues. (This remains unclear!)

Although aspartame isn’t banned in the United States, it IS regulated by the FDA and has to be tested before being used. There have been a ton of people voicing opposition to using aspartame… and many have claimed it is super bad for your health.

So as I’m sure you can figure out already… aspartame is a REALLY controversial sweetener. Yikes!

The Potential Side Effects Of Aspartame

Well, there are a lot of conflicting claims on this sweetener.

Some people claim it can cause headaches, cancer, depression, weight gain, Alzheimer’s, and a ton of other issues. One 2007 review in a medicine magazine indicated that aspartame found in certain products could cause seizures.

A study conducted with rats in 2006 found that this sweetener correlated with cancer. The study called aspartame “a multipotential carcinogenic agent.”

Another study followed this one up in 2007… and found indications that malignant tumors increased in rats.

The research on its effects and possible dangers seems to be split—some support increased risk of various disease and health problems when you consume aspartame… while others have found no negative results.

A 2013 EFSA review didn’t find any reason to take it off of the market.

On the other hand, the Center for Science in the Public Interest has compiled multiple studies suggesting serious issues with aspartame.

So… what’s the verdict? One thing that has been studied is whether aspartame can affect diabetes and weight loss. There are pros and cons to using this as a way to cut some weight.

Generally, this website indicates that artificial sweeteners could help with diabetes. But, given all of the conflicting claims about it… always talk to a doctor!

Also, while some research suggests using aspartame could help with weight loss, at least five reviews of science indicate it won’t… and could even cause weight GAIN.

This 2017 study found no evidence that artificial sweeteners such as aspartame helped with weight loss. A 2017 study in Stroke suggested that people drinking soda (where aspartame is popularly found!) were three times more likely to have a stroke or develop dementia.

Some older studies even link aspartame to an increase in headaches. While none of this evidence is yet to be deemed definitive… I will say that when I used to drink a ton of soda, I had a fair amount of headaches! (Of course, this isn’t to say it is definitely because of the artificial sweetener.)

Should You Use Aspartame?

The big bottom line here is that aspartame is, quite frankly, a really up-in-the-air sort of sweetener.

While the research and evidence still needs to be sorted out… this sweetener was also created back in the 1970s—and even then, people were voicing concerns! Ever since then, a decades-long fight has ensued over whether aspartame is the way to go or not.

So, now the big question.

Is it worth using? In my opinion, probably not.

Well… there are several alternative sweeteners out there that are far less controversial. Aspartame just doesn’t seem to be worth any possible risk.

In fact, there are a ton of natural sweeteners that will do the trick (and are not inherently unhealthy!).

Why risk any possible side effects when you can instead use a sweetener that we have way more definitive information about… and that is better for your health?

For me, this seems like a no brainer. I, for one, try to avoid aspartame.

The good thing about replacing aspartame with these alternatives is that it’s SO EASY!

For example… these 3 “good for you” sugar substitutes are available (but largely untouched) in pretty much any grocery store… and they’ve been proven to burn fat and help you lose weight.

…as opposed to aspartame and this OTHER really BAD sugar substitute that kills off ALL of the bacteria in your gut (and odds are you’ve eaten it in “low calorie” versions of foods and drinks without even knowing it).

So to satisfy your sweet tooth and cravings for dessert WITHOUT any guilt… check out this cutting-edge research now: