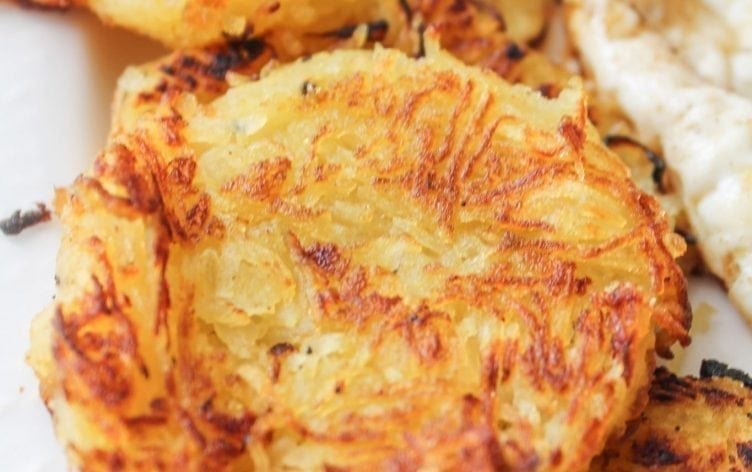 I’ve got a PSA for you today:

Spaghetti squash doesn’t have to be pasta.

In fact, I’d go so far as to argue that spaghetti squash doesn’t even WANT to be pasta.

(Despite its name of SPAGHETTI squash.)

Now, before you go all up in arms and tell me how “delicious” and “satisfying” spaghetti squash doused in cheese and tomato sauce is…

Let me just say that I used to work at a bakery/cafe in Manhattan that offered spaghetti squash baked this way, and I happily ate it many times.

It was good. Yummy, even.

But pasta, it was not.

And actually, spaghetti squash can be really delicious in other recipes, too – where it isn’t supposed to step in for pasta.

So today’s recipe is not a sad pasta substitute.

The texture of spaghetti squash makes it ideal for this purpose – normally you’d have to shred potatoes, but this squash basically shreds itself!

(And if I can make a recipe any easier, I will! So this self-shredding squash is perfect.)

And while zucchini and other squash fritters are notorious for going soggy, and being unable to crisp up as perfectly as a potato – this recipe removes ALL the moisture, so there’s no sad, soggy squash in sight.

Just crispy, delicious, aromatic low-carb hash browns… and if you scroll all the way to the bottom, I’ll also show you a quick & easy recipe for DIY fermented ketchup!

Once you try that DIY fermented ketchup… believe me, you’ll never go back to the store-bought stuff.

So you’ve got a few options here. You can either roast the squash in the oven, do it in an Instant Pot, or use a covered Dutch oven and parboil it on the stove with 1 cup of water. The goal here is to cook it, let it cool, and then scoop out as much flesh as you can.

If you’re roasting it, you can add some extra flavor by lightly drizzling it with olive oil, salt, pepper, and any other optional spices.

Whatever you decide to do, you’ll need to cook it for about 40 minutes – possibly more if you’ve got a particularly large squash on your hands.

2) Spoon out the seeds, scoop out the flesh & squeeze the water out.

Moisture is the hash brown’s worst enemy – whether you’re working with squash or potatoes.

So when the squash is roasted, let it cool, scoop out the seeds (see Recipe Notes below for a cool way to use them without tossing them!), then scoop out the flesh.

Break up any large chunks (it should shred pretty easily), and working in batches, wrap the squash in cheesecloth, a nut milk bag, or a paper towel.

Over a large bowl, squeeze that squash like it’s the last thing you’re ever going to do on earth. You really want to get as much moisture out as you can. Do not worry about this hash brown “drying out.”

Save the squash water for salad dressings, soups, stews, or even to drink on its own. It’s delicious and the smell is so fresh!

Shape the dried squash into your preferred size of hash browns, and working one at a time, place a single squash hash brown on a paper towel-lined plate.

Cover the hash brown with another paper towel, place another plate on top, and microwave for 3 minutes. This dries the squash out even more and helps it retain its shape once you cook it.

Repeat this for each of your hash browns.

In a cast iron skillet or nonstick pan, add your oil of choice. Let it heat until shimmering, then add one hash brown to the skillet.

Immediately add salt & pepper to the top of the hash brown. Continue cooking for 2-3 minutes, pressing down on the hash brown with a spatula as it cooks.

When the bottom is nice and brown, gently flip the hash brown, and season the top. Press & cook the other side for another 2-3 minutes, or until crispy all over and not soggy at all.

Slide the hash brown onto a paper towel-lined plate, repeat with the remaining hash browns, and serve immediately.

Now, let me preface this by saying that this ketchup recipe DOES have sugar in it.

However, it’s fermented over the course of 18-24 hours, so some of the sugar in this recipe will get converted into simpler sugars, making it easier to digest – and better for you.

(Plus, I can almost guarantee that it will still have less sugar than the normal ketchup you buy at the grocery store!)

To make this, you’ll need a fermentation-safe vessel. Two of my favorite options include a glass container and lid you can screw on loosely, and a mason jar with a special fermentation lid. (I get mine on Amazon.)

Plastic wrap with a small slit will also work as a lid in a pinch.

In a clean and sanitized large bowl, and using very clean hands – you should ideally wear gloves to prevent contamination – combine the following ingredients:

It should taste distinctly tomatoey, with an almost BBQ sauce-like finish. And it definitely should not taste too sweet.

When it tastes right to you, add the mixture to your clean fermenting vessel, place a barrier between the mixture and the top of the jar if there’s extra space (I usually use a small plastic bag filled with a little water – you can double the bag to prevent leakage), and screw the lid on.

The goal is not to let oxygen in, but at the same time, give the mixture space to breathe (since as it ferments it will release carbon dioxide, and that gas has to go somewhere).

After 12 hours, taste your ketchup. It will be slightly more sour – if that’s the right balance, then go ahead and throw it in the fridge. Your ketchup is ready!

If you think you can handle a little more acidity, let the ketchup go at room temperature (70-75-ish degrees Fahrenheit) 6-12 hours longer. Taste it, and when it’s ready, refrigerate!

Not having enough energy to work out…

And always going to bed hungry, if not outright starving.

(Which really doesn’t seem fair when you’ve spent so much time and energy to make sure you’re eating right!)

So that’s why instead of eating these “hash browns” for breakfast… I highly encourage you to try them for dinner, with 1-2 slices of keto-friendly bacon on top!

Well, it’s not just because I love eating breakfast for dinner (which I definitely do… hey, it beats kale salad!)…

And on top of that, one new study found that having a protein-packed bedtime snack can even help you burn up to 441 more calories the next day!

(Eat bacon in bed… lose weight the next day? Sign me up!!)

…Plus two more really easy ways to lose weight almost “passively”… even if you occasionally “slip up” while doing keto… (as a former carboholic, I can TOTALLY relate, lol)…

Then click here to see how this simple, straightforward bedtime routine can help eliminate the most common #KetoProblems, give you more energy, and help you reach your weight loss goals a heck of a lot faster. 🙂