Home » Probiotics For Weight Loss » Bad Gums & Your Health: How Unchecked Gum Disease Can Cause These 3 FATAL Conditions (Plus The #1 Way To Keep Your Gums Healthy)

Bad Gums & Your Health: How Unchecked Gum Disease Can Cause These 3 FATAL Conditions (Plus The #1 Way To Keep Your Gums Healthy) 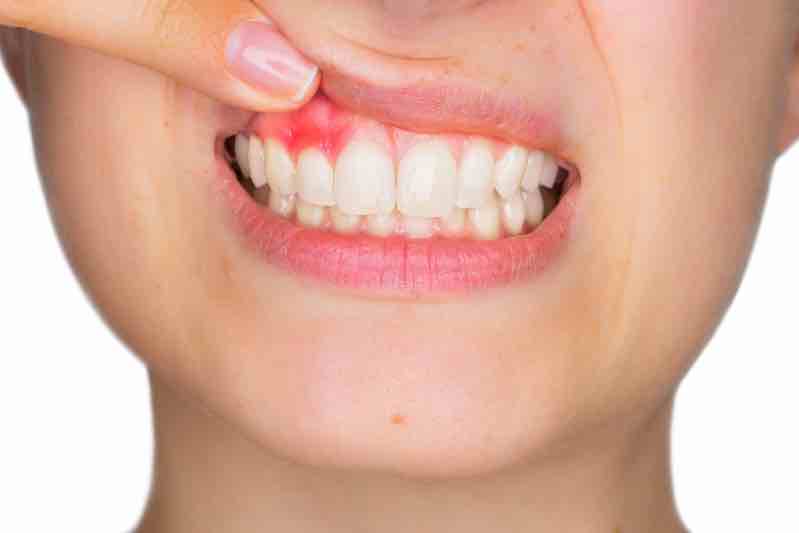 How To Keep Your Gums Healthy & Boost Your Overall Health

Many people underestimate the importance of gum health. Failing to keep your gums healthy can lead to gum disease, which causes your gums to become inflamed, swollen, and prone to bleeding.

Left unchecked, gum disease can also lead to oral cancer. In severe cases, your teeth might have to be removed.

In addition, untreated gum disease has been linked to serious health conditions that reach much further than your mouth… including heart disease, diabetes, and even some types of cancer.

One way to avoid this is simply to practice good dental hygiene: brush your teeth, floss, visit the dentist regularly, don’t smoke, and so on.

Eating well also plays a role in maintaining healthy gums. Gum disease is caused by an improper balance between “good” bacteria and “bad” bacteria in your mouth. “Bad” bacteria are what inflame your gums and cause your teeth to deteriorate.

In order to help prevent gum disease, then, you should increase your levels of “good” bacteria—or probiotics. Read on to learn more about probiotics and how you can incorporate probiotic foods into your diet.

There are many studies that attest to the efficacy of probiotics in fighting gum disease. One study showed that more lactobacilli (the most common probiotic) were present in the mouths of healthy individuals compared to those with severe gum disease.

Another study showed that patients with gum inflammation exhibited reduced levels of dental plaque after two weeks of chewing gum containing probiotics. In a study involving patients with severe gum disease, Lactoballicus brevis was shown to have anti-inflammatory effects.

Probiotics also have a positive effect on oral health in general. One study showed that fermented milk containing Lactobacillus reuteri (a probiotic) hindered the spread of mutans streptococci, a bacterium that causes tooth decay.

The concept behind health-promoting bacteria has been known to the medical community since the early twentieth century, when Nobel laureate Élie Metchnikoff proposed that the longevity of Bulgarian peasants could be attributed to their consumption of yogurt containing lactic acid bacteria.

Consuming probiotics can help treat a variety of conditions.

Probiotics are thought to be most effective for treating diarrhea and gastroenteritis (stomach flu). For instance, probiotics can be used to treat episodes of diarrhea brought about by antibiotic therapy, according to one study.

Experts have recommended that probiotics be administered to children suffering from diarrhea… which remains a major cause of childhood mortality in developing countries.

There is also evidence that probiotics can be used to treat vaginal infections. This should be of especial interest to postmenopausal women.

If you are healthy, lactobacilli are the primary bacteria present in your vagina. The administration of certain lactobacilli strains can normalize pH levels in the vagina and rebalance vaginal flora.

Some studies suggest that probiotics can also treat irritable bowel syndrome and inflammatory bowel disease. An article assessing studies on the subject concludes that “there is growing evidence that B. infantis [a probiotic] is becoming the frontrunner for treatment of IBS.”

According to another article, probiotics could also help lower cholesterol, help with allergies, and decrease your likelihood of getting cancer.

It concludes: “The best documented effects include bowel disorders such as lactose intolerance, antibiotic-associated diarrhoea and infectious diarrhoea, and allergy, and emerging evidence accumulates concerning their potential role in various other conditions.”

So, now that you know how great probiotics are for your health…

Yogurt is created from the bacterial fermentation of milk, namely by lactic acid bacteria. It is one of the best sources of probiotics.

A note, though: avoid yogurt with lots of added sugar, and be sure to get yogurt labeled “live and active cultures.” This indicates that the probiotics have not been killed off in the food processing.

Kefir is a fermented milk drink that originated in the Caucasus and Eastern Europe. It is similar to yogurt. It is laden with vitamins and minerals and is perhaps the best source of probiotics on this list.

Water kefir is also a great source of probiotics. Kefir is a good option for people who are lactose intolerant because it can aid lactose digestion. (The same applies to yogurt, but kefir is even better in this regard.)

Traditional buttermilk is a fermented dairy product and consists of the liquid remaining after churning butter from fermented cream.

Although traditional buttermilk is not used much anymore in the West, it is common in India and the surrounding area. Buttermilk with rice is a popular Indian recipe.

You can even make it yourself!

Kimchi consists of salted and fermented vegetables, such as Napa cabbage and Korean radish. It is usually served with scallions, garlic, ginger, or salted seafood.

In addition to probiotics, kimchi contains lots of vitamin C, fiber, vitamin A, calcium, and iron.

Tempeh is a fermented soy product that is often touted as a vegan/vegetarian alternative to bacon due to its meaty texture and flavor. It originated in Southeast Asia, specifically Java.

Tempeh is a great source of probiotics, as well as protein, iron, and calcium.

Soft, aged, and raw cheeses all are good sources of probiotics. Be sure to buy cheeses containing live and active cultures; pasteurized and processed cheeses are stripped of probiotics.

Miso is a traditional Japanese seasoning made by fermenting soybeans with salt and koji (a fungus). Other ingredients may include brown rice, barley, wheat, and so on.

Miso is a pasty substance that can be used in a variety of dishes. It is a good source of protein as well as probiotics.

Kvass is a Slavic and Baltic fermented beverage made from rye bread. It contains a very small amount of alcohol.

To get extra nutrients, add beets, which are a good source of potassium and fiber.

The recipe for making fermented pickles is pretty straightforward.

The Probiotic Strain That Does More Than Help Your Gums…

You might have noticed that I mentioned one group of bacteria a few times: lactobaccili.

Not only do lactobaccili help your gum health and your oral health overall… plus vaginal health, like I mentioned… but they can do a whole lot more for you.

Certain strains can even help you lose weight!

For example, did you know that two specific strains of lactobaccili have been proven in scientific studies to help people lose weight?

So, could losing weight be as simple as getting the right probiotics into your body?

Well, lactobaccili are being used by weight-loss doctors to help their patients shed pounds and pounds of unwanted, stubborn body fat.

Here’s one well-known medical doctor, Dr. Steven Masley, to show you what these strains are, how much you should take,a nd where to get all of the right strains in one place:

Click Here to Watch a Short, Free Video of A Well-Known Doctor Explaining the Probiotic Strains You Need to Lose Fat Faster