12 Reasons You Should Be Eating More Cinnamon 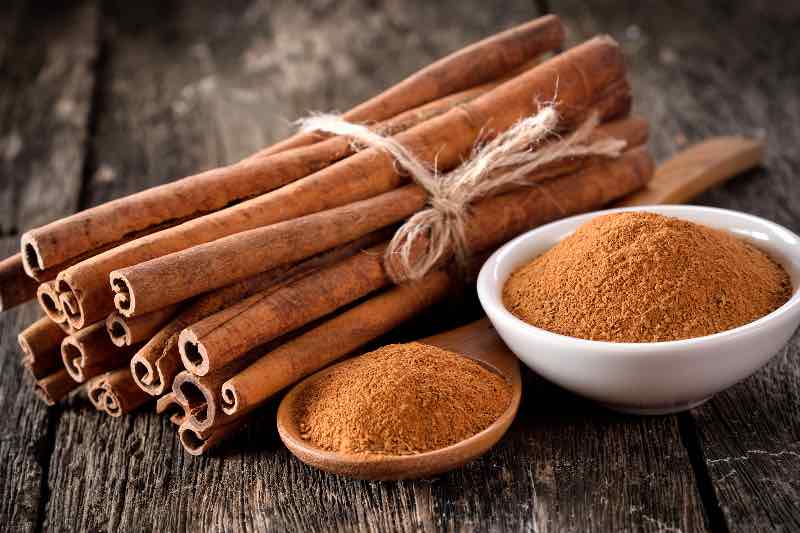 It’s delicious and is found in so many of our favorite foods and drinks. Cinnamon rolls, cookies, toast, bread, oatmeal, buns, cinnamon raisin bagels, in tea or hot chocolate, on sweet potatoes, sprinkled on vegetable and fruit dishes, pastries, apple cinnamon muffins (it’s tasty in pretty much anything containing apples), and so many other foods!

Did you know that cinnamon is harvested from the Cinnamomum family of trees? Cinnamon farmers scrape off the outside bark to reach the inside part of the bark.

They then scrape the inside, remove the woody part, and leave it out to dry. The cinnamon curls into sticks, also called quills, which can be ground into powder.

The use of cinnamon dates back to 2000 BC in ancient Egypt. In medieval times, it was used medicinally for coughing, sore throats, and arthritis.

Cinnamon has also been used for thousands of years in Chinese and Ayurvedic medicine to cure the flu, indigestion, bronchitis, and other ailments. It is full of healthy properties because it contains calcium, manganese, iron, fiber, and essential oils.

There are two types of cinnamon: Ceylon and cassia. Both contain coumarin, which has dangerous side effects if consumed in VERY high doses (you’d have to really eat a lot of it).

Health experts say that Ceylon cinnamon is a bit better for you because it contains less coumarin. However, Ceylon can also be a little harder to find… so you might have to venture to a health store or order it online.

Cinnamon is known to hold numerous health benefits. Let’s take a look at the many ways cinnamon can help lower your risk for disease and improve your health.

1) Cinnamon May Boost Your Metabolism

Cinnamon possesses an essential oil called cinnamaldehyde… which has the power to make fat cells burn more energy. Results have only been measured in a lab, so research needs to continue.

What a tasty way to lose weight once scientists can figure out how to generalize it to humans in real life!

As you age, you become more prone to inflammation. Cinnamon has anti-inflammatory properties and may be effective in alleviating arthritis.

It can also fight infections and repair tissue damage… which can help safeguard you from diseases.

Cinnamon can decrease the amount of glucose that enters the bloodstream after eating. It does this by acting on digestive enzymes and slowing the breakdown of carbohydrates.

Cinnamon can also imitate insulin and lower fasting blood sugar levels. It doesn’t work as fast as insulin, but it certainly helps.

Cinnamon may be able to combat neurodegenerative diseases. Those diseases result from continuing loss of structure or use of brain cells.

A protein called tau builds up in the brains of people with Alzheimer’s. An experiment on mice showed that cinnamon aided in the protection of neurons, helped motor function, and brought neurotransmitter levels back to normal.

While this has not yet been tested in humans, cinnamon shows promise for helping to protect you from neurodegenerative diseases.

5) Cinnamon May Lower Your Cholesterol Levels

In a small study, 60 people consumed a quarter teaspoon of cinnamon daily for 40 days. By the end of those 40 days, their cholesterol levels had decreased.

Another study showed that after less than five months of cinnamon intake, the subjects not only decreased bad (LDL) cholesterol, but also increased good (HDL) cholesterol.

6) Cinnamon May Decrease Your Risk Of Cancer

High levels of antioxidants like polyphenols in cinnamon may protect against DNA damage and cell mutations. These are hallmarks of cancer.

Again, animal studies have illustrated that cinnamon may help lower your risk of cancer… and human studies need to be performed to confirm that people can benefit in the same way.

7) Cinnamon May Reduce Your Risk Of Heart Disease

A combination of cinnamon’s benefits makes it a powerful weapon against heart disease.

BRAND-NEW: The Absolute BEST Supplements For Weight Loss… As Proven By Science & Recommended by Doctors

The aforementioned ability to reduce bad and increase good cholesterol… to decrease blood pressure… and cinnamon’s power to help regulate blood sugar… all combine to make it a great tool in lowering your risk for heart disease.

Cinnamon’s cinnamaldehyde may be able to fight some bacteria strains… including staph, E. coli, and salmonella. Cinnamon can also stop the growth of Listeria.

Scientists aren’t sure exactly how cinnamon can do this, but it’s a great, natural solution!

In one study, cinnamon tea reduced PMS and cramps. Women ingested three grams of cinnamon each day during the first three days of their period. A control group took placebos. The subjects who took the cinnamon reported experiencing less pain.

In another study, subjects consumed 1½ grams of cinnamon, a pain-relieving medication, or a placebo. The actual drug reduced pain the most, but cinnamon was also effective.

11) Cinnamon May Lower Your Blood Pressure

Did you know that cinnamon face masks are a thing?! A small study showed that Ceylon cinnamon can fight the bacteria responsible for acne.

Moreover, another study indicated that cinnamon can boost collagen production! This is important because you lose a great deal of collagen as you age. Other treatments, like fillers, can be very expensive (and needles are painful!).

Speaking of looking good, you might want to try some of these cinnamon DIY beauty treatments for clean pores, plump lips, hair growth, fresh breath, and to exfoliate your skin.

What a versatile spice! Is there anything cinnamon can’t do?!

Here are some yummy cinnamon recipes if you’re ready to indulge in cinnamon and test out all these potential health benefits.

Can’t get enough cinnamon? Try these recipes, too!

Another Spice That Has ENORMOUS Health Benefits…

And what’s so great about it is that you can just sprinkle a little bit on pretty much anything to get all of the potent health effects.

There are several “Super Spices” like this… they’re super easy (and delicious) to use daily for some real results. So let me share another one of my favorites with you:

Yes, that delightful spice that gives Indian and Middle Eastern foods much of their rich, exotic taste is ALSO a powerhouse of health and longevity!

Not only does it help reduce joint pain and stiffness…

But it also can help reduce inflammation throughout your body.

And as you may know, inflammation truly is a “silent killer.” It throws your hormones out of whack… increases stress… increases pain… and is linked to early mortality.

Being able to eat your way to health sounds like a great way to combat that.

You’re going to want to find out all the ways you can use this “Super Spice” to protect your body, heal from inflammation, and discover all the other things it can do… and the RIGHT way to use it.

You gotta check this out: