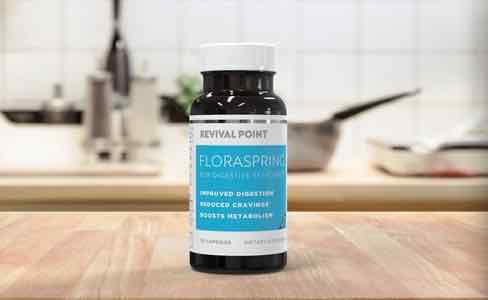 I’ve written a lot about probiotics. As someone with PCOS… as well as a couple of food sensitivities… I take my gut health very seriously. One bad gut day can mean migraines, mood swings, and a whole lot of discomfort or pain.

So when I got the chance to try out FloraSpring probiotic supplements, I was eager to get started. I already eat a lot of fermented food… so I have dietary sources of probiotics. But the more concentrated amount in a supplement was something I wanted to see the effect of.

As of the time I’m writing this, I’ve been using FloraSpring twice a day for about two weeks.

I haven’t noticed huge changes… which is honestly in line with what I expected. The gut biome doesn’t change that fast unless you introduce something really bad to it.

But while there weren’t any huge changes, I did notice a few smaller changes.

Like I mentioned before, I have a few food sensitivities. Gluten is the worst… but raw tomatoes will also upset my stomach.

And before I started taking FloraSpring, I knew pretty quickly if I’d eaten either food. Within an hour, my stomach would get upset and it would stay that way for a while.

A couple of weeks on this probiotic supplement though… and it takes larger quantities of the foods before I notice any problems. And when I am exposed, the symptoms fade much sooner.

My food sensitivities will never be cured, but taking FloraSpring seems to help me manage them.

My Cravings Are More Manageable

PCOS—along with causing some food consumption issues—also tends to leave me with some pretty intense cravings. I either want sugar or salt in high quantities.

This means I’m usually reaching for some kind of junk food… despite knowing it’s not good for me.

Since starting FloraSpring though, my sugar cravings are a little more manageable. I still crave sugar, of course.

But I’m not about to eat an entire pack of Sour Patch Straws while I’m drinking a Coke. And, yes, that was something I used to do.

Part of that craving reduction might be a change in my eating habits, of course. I put a rule in place that I couldn’t keep soda in the house… although other junk food hasn’t been banned yet. So reducing my sugar intake overall definitely helped.

But I’m sure that FloraSpring helped the rule stay in place. I’ve set rules like this before… but they usually fail after a week.

This time, however, it seems to be sticking. Part of that, I’m sure, is that my gut biome is more balanced.

Instead of intense cravings, I just have a normal low-level interest in sweets. And when I choose to indulge them, I can usually satisfy them with some berries or a banana covered in dark chocolate.

Expectations For The Next Two Weeks

The changes I’ve seen so far are pretty mild… but it’s only been two weeks. I will write another review after I’ve been taking FloraSpring for a month and see where I’m at.

Before then, however, I have a few predictions:

I have a strong feeling my sugar cravings will decrease even further. That’s probably the change I’m most hopeful about… since sugar isn’t something I’m supposed to eat a lot of.

And if I can get my cravings under control… I’ll be more likely to eat according to the guidelines that work best for PCOS (low carb, high protein, and healthy fat).

As with my food sensitivities, taking a probiotic supplement like FloraSpring isn’t going to heal my PCOS. But if they can help me keep my cravings in check so I don’t eat things that aggravate my condition… then I will definitely keep using them.

Because when it comes to my health—and especially managing my chronic condition—every little bit helps.

And it made reaching my goals and keeping my no-soda commitment SO much easier. I know it can do the same for you.

(You might know Dr. Masley from his top-rated PBS TV show 30 Days to a Younger Heart. He consulted on the formulation and endorses FloraSpring wholeheartedly).

P.S. – Sometimes the button doesn’t load when you click on that link… so here’s a little trick—if that happens, reload the page and the button should load immediately. 🙂